When we last parted ways I believe I was undergoing the fully expected pre-surgery freak out.

All that kept spinning through my head was that stupid documentary I had watched umpteen years ago about people who had undergone anesthesia, but it didn’t work and they felt every.single.thing.  With my luck, I was going to be one of those freaky few whose anesthesia didn’t take and I was going to be seeing, hearing, and feeling EVERYTHING.  AAAAAAAGGGGGHHHHH!!!!!!

(SPOILER ALERT: Out like a light.  Took all of about a nanosecond.  Didn’t feel doodlysquat.)

Back to our regularly scheduled program…

Knowing that I wouldn’t be able to eat anything after midnight the night before, the hubs filled me up on cheese, tortellini, and of course, a nice bottle of Cabernet.  Because he’s awesome like that.

After finishing up the evening’s gut-busting with a bowl of vanilla ice cream mixed with dark chocolate pieces – go ahead, it’s okay to drool, I won’t tell anyone – it was time to face the inevitable…..girlfriend had less than 18 hours to go before the surgical shenanigans were to begin.  Yeah.  YOU try sleeping with THAT hanging out there. 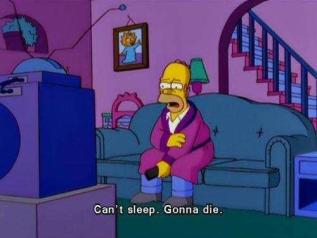 Oh Homer, you are right on buddy.

When we return, I’ll take you on the laughable journey I like to call, “Black Dog’s Adventures of Arriving at the Hospital Early For Absolutely No Friggin’ Reason Whatsoever”.  On the next installment of “And We’re Off!. Part 2.”

Can’t hardly contain your self, can ya?

How were you able to sleep the night before your surgery?  Did you sleep better with some Cabernet, Merlot, or a Sauvignon Blanc?  Mint chip or Rocky Road?  Did it work, or was it an exercise in futility?  If you had to have surgery, how do you think you would be the night before?