And just like that, another beautiful light goes out.

Unless you pay absolutely no attention to the sports world, then you know what a great loss the world has suffered.  Stuart Scott was as engaging as your best friend, funny as any professional comedian, and as down to earth as the guy next door.  A devoted father, consummate professional, and creator of some of the best sports quotes known to man, Scott was the picture of determination and inspiration to those who knew of his fight against cancer.

Feeling like I was raised on all things sports and ESPN thanks to an older brother, my love of sports continued – and still continues – thanks in no small part to my ESPN-addicted husband.  Nary a day goes by that doesn’t start with Mike and Mike, or end with PTI and SportsCenter on a TV somewhere in the humble Black Dog abode.  Saturdays are meant for NCAA football and Sundays are devoted to the NFL.  Baseball, basketball, it doesn’t matter, we watch it all.  But the best, the best, are the back stories.  Whether it was about a football player down and out on his luck who made it to the big show, or an athlete who came back from the brink of death to prove to the world she was the best,  Scott brought us those stories in his own unique way.  But the best back story, was his own.

Along with thousands of others, we welcomed Scott into our home, welcomed his knowledge and insights into all things in the sporting world.  He exuded confidence and objectivity, but above all, he inspired us – to fight, to be strong, to be a better person.  And that will be his legacy. 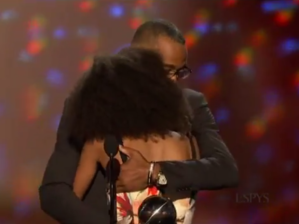 He fought the good fight, and in doing so – in his own special, unique way – he beat cancer.  The disease may have eaten away at his body, but it never touched his soul.  He wouldn’t let it.

During the third quarter of the AFC Wild Card Game on Sunday, Jim Nance summed it up in six small words, “What a man.  What a loss.”  I don’t think anyone could have put it better.  No one, except perhaps, Scott himself.

8 thoughts on “The Cooler Side of the Pillow”